The Stupidity Is Too Much!

There is an account in the Bible about how Paul and Barnabas went to Lystra, preaching the gospel among the Gentiles, and then came across a cripple.  Paul speaks to the cripple that he may be healed, and he is healed.  Immediately, the people believe that Paul and Barnabas are gods, and decide that they want to do sacrifices for them.  However, Paul and Barnabas tear their clothes and speak to them to convince them that they too are mere men.  Not long after, some Jews come and turn the people (who moments earlier revered them as gods) against them, and they stone Paul until they believe he is dead, and drag him out of the city!

You can read the whole account at Acts 14:8-20.  It is quite unfathomable how foolish humans are, without the true knowledge of God.  In his speech to the pagans, who were about to worship men, Paul said concerning God that “in times past [He] suffered all nations to walk in their own ways” (verse 16).  This was quite resounding to me.  Religions like Hinduism and Buddism could spring up and develop roots, because God suffered them to be so ignorant.  Well not anymore!

People usually say that Jehovah cannot be the one true God, because there are so many other gods believed to be true, and thus He would simply be one among many.  But there is no God that has gone the lengths of Jehovah to show His power, love and wisdom among men.  The gods they worship are among His creations (like the Sun and Moon) or even worse, they were created with their very own hands – even made of wood and stone!  But the only true God was never created, and has no beginning or end.  Unlike these false gods, He does speak and work wonders among His people. 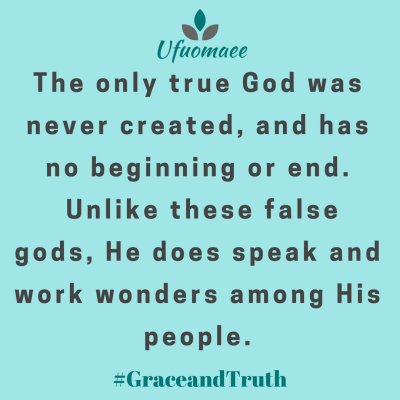 When I read that verse by Paul, I could just imagine how frustrated God would have been, when He eventually decided that enough was enough with all these people walking about in their foolishness, worshiping things that were created, and not considering Him!  The stupidity was rampant, and He chose the Israelites to be a People by whom He would reveal Himself to the world, and turn them to the true worship of the God for whom their hearts ached!  They worship false gods because they know there is a god, but their reasoning is short-circuited to settle for anything that causes one to go “awww!”

But they cannot hold their convictions, because their convictions are baseless.  They are only as deep as their bellies, emotional, superficial, irrational (Phil 3:19)!  Having seen the miracle done by Paul, they didn’t reason that they were worthy of listening to, that they may in fact be on to something, but were quickly turned away by their opposition (who knows if the Jews offered them money, food or protection), and hated the light that had come unto them!  Even the Hebrews, who knew God intimately, for He delivered them mightily from the oppression of the Egyptians, quickly thought to CREATE a god of their own imagination, in the form of a calf to worship!  How fickle and desperately wicked is the heart of man.

However, the stupidity of the pagans cannot be compared to the stupidity of the Atheists who, for their inability to ‘find’ God, with their half-hearted searches and proud thinking, conclude that there is no God to find.  They sit precariously upon their scanty knowledge, satisfied to be ignorant on this grave matter, and decide that it was in the absence of their great knowledge that their ancestors thought to believe in God.  But now they know better.  Now they know enough.  Now they know that God doesn’t exist.

Truly, truly, ignorance is not bliss.

“Seek ye the LORD while he may be found, call ye upon him while he is near:  Let the wicked forsake his way, and the unrighteous man his thoughts: and let him return unto the LORD, and he will have mercy upon him; and to our God, for he will abundantly pardon” (Isa 55:6-7).