The greatest and most effective lie of the Devil is the lie that he doesn’t exist!!!  So many people are comfortable believing this lie, while he continues his ministry in their lives…leading them farther and farther away from the truth.  If you don’t believe he exists, you won’t resist him, you won’t suspect him, you won’t watch out for him, and you won’t even know you are in danger!  He’s got you right where he wants you.

If however, you do believe there is such a thing as the Devil, or you suspect that there just might be, but you’re not altogether sure…you could get spooked by him.  You might be afraid at the thought or idea of him.  You might be weary of people who talk about him, afraid that he will suddenly show up and frighten you to death.  However, because you are not altogether oblivious to his devices, he will work harder to trick you, through white lies.

These are lies that have the appearance of truth, of wisdom and of love, but which are far from being the truth, wise or loving.  He wouldn’t use blatant lies, because you would spot them as such, and not accept them into your belief system.  He appeals to the little insight that you have, and appeals to your pride, as he adds his venom and distorts the truth.  You will think it is genius, inspired even!  But if you know the truth, if you have the Spirit of God, you will be able to discern when an inspiration is of God or from the Devil.

No doubt, the Devil is active in ministry.  He is even more fervent that the most annoying evangelist!  He knows that his time is short, and he has a well-organised team of demons and a very effective strategy for getting people to fall for his lies.  He even goes so far to masquerade as an Angel of Light (2 Cor 11:13-15), serving in the Church and gaining a following, through which he teaches his lies to an unsuspecting and misguided congregation. 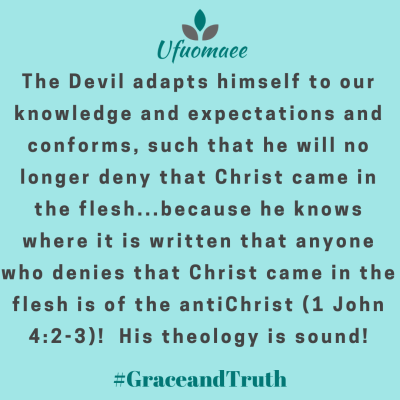 In such a situation, it can be hard to know who is genuine and who is not.  The Devil adapts himself to our knowledge and expectations and conforms, such that he will no longer deny that Christ came in the flesh…because he knows where it is written that anyone who denies that Christ came in the flesh is of the antiChrist (1 John 4:2-3)!  His theology is sound!  But here is the gotcha.  His ministry is to prevent you from obeying Jesus at all costs!  He won’t stop you from believing in Him, that’s too obvious!  His ministry of engaging apologists and theologians in debate is thriving, because while they are busy defending theological accuracy, they are not paying any attention to what Jesus commanded them to do.

Now, you won’t be hard pressed to find someone who claims to believe in Jesus.  You will, however, have a harder time finding those who actually obey Him.  This is how very effective the Devil’s ministry is!  There are too many pastors who have run ahead with the message that “God so loved the world that He gave His only Begotten Son, that whosoever believes in Him shall not perish but have everlasting life…” (John 3:16)  They didn’t bother to read much else that Jesus said, or even cared to understand Jesus’ instruction when He gave the great commission, that His disciples are to TEACH people to OBEY everything that He taught them (Matt 28:19-20).  Just believe and be saved, they say!  The Devil loves it!

This is great, because while people are comfortable being saved, without actually knowing or doing what Jesus commanded them to do…they are at the gate of the Kingdom of Heaven, but they have not entered!!!  They have camped outside, and are celebrating, but they haven’t considered the narrow gate, that they must enter through to safety!  The narrow Gate is Jesus – it is also the Cross (Luke 14:27-33).  Jesus said “I am the Gate” (John 10:9).  He is also the narrow Way…the Truth and the Life (John 14:6).  They prefer to fall back on the Law and the Prophets for guidance, digesting the wisdom of Solomon, and neglecting the greater wisdom of Christ (Matt 12:42, Gal 3) – the very WORD OF GOD, Himself (John 1:1)!

Jesus condemned the Pharisees for having the keys (the truth) to the Kingdom, and for not only refusing to enter, but hindering others from entering, through their false teachings (Luke 11:52).  The same thing is going on now.  Too many Churches are camped OUTSIDE the Kingdom of Heaven.  Their leaders may or may not be intentionally withholding the truth from their congregation, so that they can continue to enjoy the pleasures of this world.  As such, they are acting like agents of the Devil, carrying out his ministry by hindering people from entering the Kingdom of Heaven through obedience to Christ.

One of the ways they do this is by telling people that obedience to Christ is the same as trying to work for your own salvation!  But Christ certainly doesn’t think so, because He said, and I quote: “If you love me, you will OBEY my commandments” (John 14:15).  And it was on this basis that He promised us eternal life…which is knowing God and Jesus (John 14:23, John 17:3)!  If you don’t obey Jesus, you don’t know Him…and He doesn’t know you (Luke 6:46, Matt 7:22-23)!  Jesus said that those who obey and continue in His word are His real disciples…and they will know the TRUTH, and will be set free by it (John 8:31-32)!  These are above deception; untouchable by the enemy!

If all you have is head knowledge, and not practical obedience, you don’t know Jesus.  You are outside His Kingdom, being deceived by ministers of the Devil, who are delighting in your ignorance or disobedience!  Jesus doesn’t want you there…  He wants you to follow the narrow way that leads to life eternal (Matt 7:13-14).  If you are camped outside the Kingdom of Heaven, even knowing the truth, having compromised because the choice to deny yourself and take up your cross was too hard for you to make, and have chosen instead to deceive others by playing Church…you will not go unpunished!  You are willfully deceived and have become a deceiver!

These false teachings have caused many to feel comfortable in the company of great crowds of professing believers, never caring if their faith have works.  It has caused them to run in fear of those who actually teach obedience to Jesus, and to call them CULTS or heretics.  It has caused many people to wear crosses on their necks, without ever having to deny themselves of anything.  Such a faith is powerless, dead!  Make sure you’re not found among this great company of unBelievers!  Do not be afraid of the unpopular cult leaders, be afraid of those whom the world speaks well of (Luke 6:26)!

We all need to evaluate our lives to see if we are actually within the Kingdom of Heaven or camped outside at the Gate?  Those who will be saved are those WITHIN the Kingdom, who have denied themselves and taken up their cross in obedience to Christ.  Who have forsaken all they had, and passed through the eye of the needle to the other side of Life (Mark 10:25).  Those who not only believe Jesus, but also obey Him and teach others to do likewise!  Don’t settle for just believing…go all the way, because even the demons believe and shudder (Jam 2:19)!

My dear Brothers and Sisters, I exhort you today to “work out your salvation with fear and trembling” (Phil 2:12). 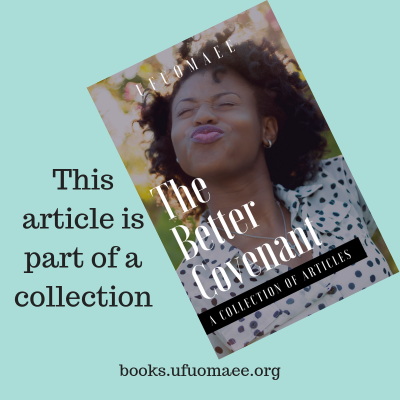