We owe it to feminism for the blurred roles in the family. Women emancipation has often caused confusion to both women and men. They are crying in the streets… “you don’t have to slave in the kitchen anymore”, “you’re free to get a job now”, “you can even run for President!”

The ladies are running out of the kitchen and out of every other enforced label, trying to prove that they can run the world like men… and that men are not even needed at all. I believe in the original ideals of feminism, but this is feminism that is not submitted to God. It is not informed or guided by God, and so, though it should flow in a stream and bring nourishment to all, it has gushed out, breaking the banks of the river and is flooding people’s lives with confusion and misery.

Men don’t know what their role is anymore. In trying to be politically correct, many don’t hold to chivalry or exercise courage or honour. They have been bullied into silence, and so they don’t know how to lead in a world that demands and demeans their leadership.

But what we all need to know is that men and women are different! Not just biologically, but socially, emotionally, physiologically and more. It isn’t appropraite to force them to carry out the same duties, because when everyone is the leader, nothing gets done! No one takes responsibility and everyone is to blame. We need to understand the essential differences between the sexes, and support both sexes to live in harmony, not in competition or conflict with each other.

Especially in the home! If society doesn’t need the distinction, most certainly, the home does! A woman shouldn’t be expected to protect her home from attack, any more than the man is expected to nurse the babies. A man has the duty to pursue, provide for and protect his wife and his home. 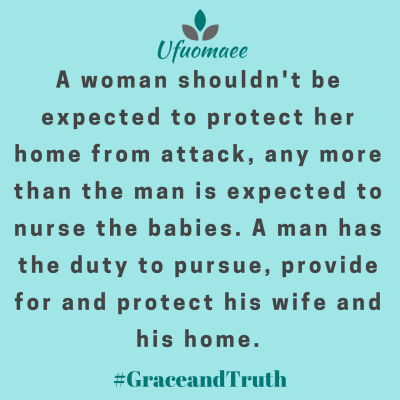 Before he marries a woman, a man seeks for a good wife and courts her. When he is in pursuit of a wife, it shows his maturity and readiness to serve as a husband. However, a woman in pursuit of a husband is often unattractive. Even after their wedding, he still has the duty of pursuing her, by showering her with love and affection. It just so happens that women need this affirmation of love more. For men, their most fundamental affirmation of love is respect, hence the emphasis that is laid on women to submit to their leadership in marriage.

I’ve never met a woman who respected a man who had no desire to provide for her! She might love him… but very soon, that love will be eroded as the cares of the world attack their home. It’s not that she can’t, won’t or shouldn’t work, it’s just that being and feeling loved by a man comes with the expectation that he will care for her, by trying to meet her needs… and going so far as to even satisfy some (or all, if he’s able) of her wants too…

A man’s duty to protect his home can not be over-emphasised. There are many attackers of the home, but the husband must be the primary spokesman or general when going to war against these enemies of the home. The enemies come in all shapes and sizes…

There are the seductive women, many who enjoy chasing unavailable men. There are the flatterers, who pursue women, desirous of attention they don’t get from their husbands. There are the in-laws, who, unfortunately, don’t always accept the wife and make her life a living hell (or maybe, it’s the husband whose manhood is constantly under attack by his wife’s family). There is strife, financial or other challenges that attack their efforts to thrive as a unit. There are also political (e.g. neo-feminism) and spiritual (e.g. sexual immorality and confusion) forms of attack against the family as an institution and the man as the leader of the home.

Women are often pursued by men with promises that they will be cared for and looked after. A woman, whose husband satisfies these duties, wants for nothing!!! And a man who loves and honours his wife by continually pursuing, providing and protecting will find that his home is blessed, as his wife returns the favour with love, respect and trust! 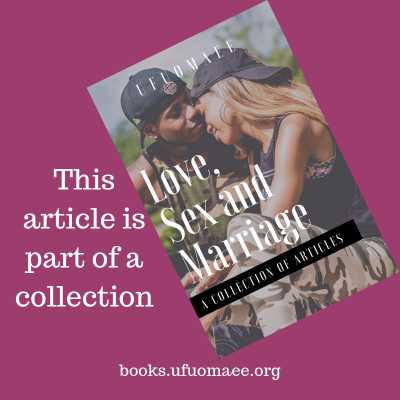 Categories: Issues of Life, Matters of the Heart, Sex and Sexuality, The Latest, The Realm of The Woman, True Religion