In my previous post, I concluded my discussion by ending with an appeal for women to take the sacrificial route, rather than demand their right to their bodies and life in the abortion debate.  However, I thought more on it and realised that the debate doesn’t end there. We also need to consider the role of choice in the definition of sacrifice!!!

Yes, sacrifice is about love, which is the higher law.  However, if there is no choice, it wouldn’t be a sacrifice.  In order for one to make a sacrifice, someone has to have a liberty to choose whether to lay down their lives or not to. When Christ walked on the Earth, He repeatedly made known to His disciples that He came willingly and was free to die for Mankind or to walk away.  In the garden, before His crucifixion, He was plagued with the choice as well.  And He made the right one, thankfully.  He made the sacrifice for you and me.

If Christ didn’t have the choice, we wouldn’t value His sacrifice at all.  The same way that God gives us the choice about loving and obeying Him, or not.  If Jesus hadn’t made the sacrifice, we would all be doomed!  So, which is greater, choice or sacrifice? 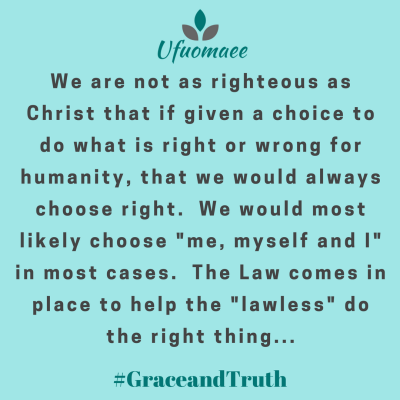 It seems like a chicken and an egg thing.  Of course, we are not as righteous as Christ that if given a choice to do what is right or wrong for humanity, that we would always choose right.  We would most likely choose “me, myself and I” in most cases.  The Law comes in place to help the “lawless” do the right thing; hence Paul’s message to Timothy:

“We also know that the law is made not for the righteous but for lawbreakers and rebels, the ungodly and sinful, the unholy and irreligious, for those who kill their fathers or mothers, for murderers…” (1 Timothy 1:9)

We, who have an internal law, and know that sacrifice and love is the better choice, are not hard pressed to choose rightly and stand by the Pro-Life defense.  The question is, if you are not willing to make the sacrifice, which is the right thing to do, would it be right to force you to do what is right by using the Law?  That is by criminalizing abortion?

I am not on the fence about this one.  The answer is a resounding “YES”!  Absolutely!  The same way rape, murder, armed robbery and many other social vices that don’t serve the best interest of humanity are controlled by the Law, abortion also needs the backing of the Law, for those who are not willing nor understanding enough to make the right choice.   The End.

Categories: A Different Perspective, Critical Thinking, Issues of Life, Matters of the Heart, Motherhood, Series, The Latest, The Realm of The Woman, True Religion