What Are You Afraid Of?

It has become general knowledge among my readers that I do not hold the Bible to be infallible. Understandably, it’s a shock to many, because I profess to be Christian, and have many posts built on a vast knowledge and appreciation of scripture. Some think that I hold my view ‘by mistake’, that I do not understand the meanings of inerrancy nor infallibility, or that I’m simply misguided, and in time, I will come to know and accept the truth – which is that the Bible is infallible.

However, I’m resolutely convinced that they are not only mistaken, but under a strong delusion. I can’t understand the resistance to this very simple truth, except to consider that perhaps they are afraid of the truth. I am told, quite adamantly, that I hold my position dangerously, and I can’t help but feel that they think I should be afraid to hold such a view.  Am I in danger of hell fire?  I thought my salvation was based on faith in Jesus, not the Bible’s infallibility!

Actually, I have been afraid. Afraid to be seen differently. Afraid that I wouldn’t be taken seriously as a Christian or rejected as a heretic. Afraid that my writings will be discarded, when they realise that I don’t subscribe to the infallibility clause. I have been afraid that I wouldn’t be able to defend my position. However, the more and more I’ve been pushed to change it, the more I realise I owe it to the truth to defend it!

Now, I have to ask, what are they afraid of??? I can think of a few reasons that someone might choose to hold the view that the Bible is infallible. If there is more, please feel free to enlighten me. Here are the ones that come to mind:

1. For moral standards. I think they are afraid that if the Bible is not accepted as infallible, people would not hold to the same moral code, because they would ascribe the teachings they dislike as opinionated or old-fashioned;

2. For historical validity. If the Bible’s accuracy was questionable, then it could no longer be used to prove certain historical facts that attest to God’s relationship with the Jews and the life and teachings of Jesus;

3. For spiritual guidance. I think they are afraid that too many people with diverse perspectives, righteous and unrighteous behaviour, could claim that they are each acting on God’s counsel, direction or inspiration, such that we can no longer be certain what is true revelation or false;

4. For unity of worship. If the Bible is not accepted as infallible among Christians, then there would be no basis in saying that only Christians have the truth, and that Jesus is the only way. It would simply be one of various holy books.

5. For belief and comprehension of God. Since the Unknown God revealed Himself to the Israelites, the Hebrew Bible is evidence that God exists at all. To be able to discredit it in anyway, may erode one’s foundation of belief in God.

I think I have covered it all. I hope this shows that I fully understand the position I am taking by saying that the Bible is not of necessity infallible.  It seems to me that the whole foundation of the teaching that the Bible is infallible is because God CAN make an infallible Book.  Certainly, He can, but it doesn’t mean the Bible in its diverse versions, (as many are aware that certain books have been rejected from the original canonized scriptures that made up the original Bible) is it!  Still, they pull every quote about God’s Word being pure and true, to ascribe it to the Bible as an entity.  It is simply a false, or misguided association.  Yes, the Bible contains God’s words, but it doesn’t mean every word of it is God’s own words!

If it is infallible, praise God. If it is not, praise God all the more!  Why do I say praise God all the more…? Because it is in the nature of God to use the weak things to show forth His glory! If the objects He chose to use had any glory of their own, He may not get all the credit! That’s why He chose to fight a war with 300 men! That’s why He made the Israelites circulate Jericho seven times to bring down the wall. This is how God put it across to Paul:

God’s power is more evidently displayed in the Bible, by the collaboration of many great men of God in its compilation, by the authority it commands, by how God has preserved and how God chooses to use it to bring about salvation for mankind. God uses men and uses the Bible, but only Jesus has the fullness of God’s glory and is the infallible Word of God (John 1:1).

God’s power will also be shone in the end, by how He builds, guides and leads His Church, through the ministry of the Holy Spirit…despite our theological and cultural differences, stubborn arguments and incessant divisions! Despite ourselves, God will unite His Church by His Spirit and His Spirit alone.

Those who are a part of His Body are already being moved by His Spirit to unity. They will grow in understanding of Him, appreciation of each other’s unique gifts and abilities, graciousness towards all men and ultimately become more Christlike as they learn to submit to His Spirit.

It was the Spirit of God that reminded the Apostles of all Jesus did and said. As they were moved by love for each other, they also wrote epistles. We too, have been promised this same Spirit. To deny that is to actually affirm that you do not really hold the Bible as infallible or even true, because the ministry of the Holy Spirit is a fundamental aspect of the Christian Faith.

However, as I shared in my post, MY CASE FOR JESUS, THE WORD OF GOD AND THE MINISTRY OF THE HOLY SPIRIT, one of the dangers of holding the Bible as complete and infallible is the accompanying teaching that God has ceased giving His children inspiration to write or revelations of any nature! That is a lie from the pit of hell!  Is it not the same Bible that declares that in the last days, God will pour out His Spirit on all flesh (Joel 2:28)???  In the Book of Revelation, chapter 11, we also read about two witnesses who will minister as prophets of God before Christ returns.  I do fear that they will be disregarded and persecuted by the mainstream Church as heretics, at the rate we are going!

If we discard the Holy Spirit, how then will God grow His Church? Is it through our bickerings over the one thing the majority of Christians actually agree on (being the Bible)???  It is not enough that I accept the Bible’s authority and submit to its revelation of Jesus Christ, I must also profess that is infallible?  And I must agree with you on every point of contention within its pages? 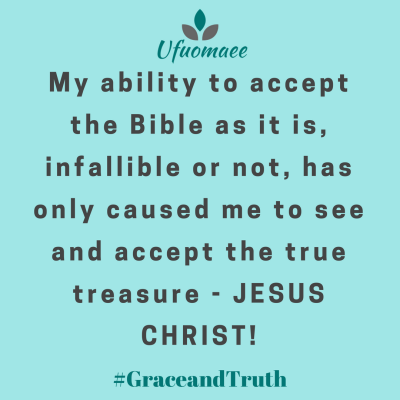 Many accept that the Holy Spirit inspired men to write the various books of the Bible, but deny that the same Spirit is at work among Christians today, inspiring us to write poetry, music, literature and more.  I am not saying that there needs to be a Bible Part 2, or that Christian writings should be cataloged as sacred scriptures.  What I am saying is that we cannot simply declare the Bible as complete and infallible, just to stop the critiques from our opponents!  We can see how totally ineffective that approach has been.  What is more, it has done more harm by convincing our opponents that we are either ignorant, deluded or just plain liars!

So really, what are you afraid of?  That there will be chaos?  There’s chaos anyway!  That people will not submit to the same moral code?  They continue to do as they please, even as they faithfully attend Church carrying their Bibles!  That people will try to discredit the Bible?  They do so regardless, and by your stubborn stance, you’re giving them ammunition!  That Christians will not all hold to the same belief in Jesus?  There’s no unity there either.  My ability to accept the Bible as it is, infallible or not, has only caused me to see and accept the true treasure – JESUS CHRIST!

Maybe if we had enough faith in God to unite His Church through the Holy Spirit, and not declare the end of revelations, more people will have real relationships with God, which will lead more of us to unity of Faith; understanding and practice.  Maybe if we had not blocked our ears from hearing God, the world would not be able to deny that His Spirit is at work in us, and actually listen to what we have to say.  But, we have pretty much declared God dead, by the claim that He cannot speak a word outside of what is already written in the Bible.  I can imagine that the Real Sovereign God will be very angry at such a notion.  And dare I say, it could be the reason you are unable to perceive Him outside of the Bible.