But whenever people try to tell me that it is flawless and inerrant, I feel like they have taken away from the book I love.  I wonder if we read the same Bible.  I wonder if they truly know and appreciate the book they have built their faith on.  Because you can’t love something or someone you don’t know.  If you can’t acknowledge, accept and appreciate their flaws, then it isn’t them you love, but your idea of them…

People argue so vehemently that my profession that the Bible is not inerrant is baseless and actually diminishes GOD, who they believe is the Author of this sacred book, from start to finish, every word.  Well, I hate to burst your bubble, but there are various documented inconsistencies and contradictions in the Book.  The truth is you only need one to disprove this theory of Biblical Inerrancy.  Today, I want to spotlight one I discovered recently.  It is the account of David and the census he ordered to be done on Israel and Judah recorded in 2 Samuel 24 and 1 Chronicles 21.

If you check both accounts, it is easy to see that they speak of the same incident.  However, the figures recorded for the results of this census are quite and noticeably different.  In the first account in 2 Samuel, it is written that:

Verse 9: “And Joab gave up the sum of the number of the people unto the king: and there were in Israel eight hundred thousand valiant men that drew the sword; and the men of Judah were five hundred thousand men“.

Verses 5-6: “Joab reported the number of the fighting men to David: In all Israel there were one million one hundred thousand men who could handle a sword, including four hundred and seventy thousand in Judah.  But Joab did not include Levi and Benjamin in the numbering, because the king’s command was repulsive to him.”

We can also take note of another difference.  To me, it’s not such a big deal, because I believe I have an understanding of what happened.  But this is particularly touchy for people of different theological perspectives…  Those who argue that God never causes evil or tempts men to do evil will not like 2 Samuel 24, which says that it was God who put David up to this act, which He then judged as evil – another issue of contention among different schools of thought.

However, in 1 Chronicles 21, we are told that it was Satan who stood against Israel, and put this wicked thought in David’s heart.  My thought is that both could be feasible, because when it comes to God manipulating a situation to bring about His judgement, this would not be the first time, nor the last.  It is well known that God repeatedly hardened Pharaoh’s heart so that He could perform His wonders in Egypt by delivering them from bondage.  Nowhere is it suggested that it was the Devil that made Pharaoh stick to his guns.  There’s also the famous account of God boasting about Job, and giving the Devil the idea and the approval to go and inflict him and his family, in order to prove that He was right about him.

So, since they both report on the same account, and their disagreement is not simply on one issue, this observation is sufficient to discredit any claim to the Bible’s infallibility.  Whatever the conveniences and the reasons you have chosen to believe this theory, you ought to face the truth now and admit that it’s not true.  It doesn’t mean that the Bible is not good or reliable in all the ways we have known it to be… 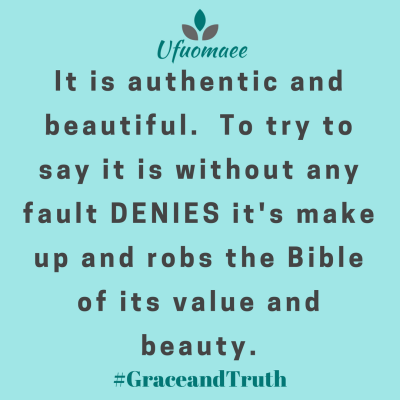 As I keep saying, though it seems the moment I question the inerrancy of Scripture, this verse gets thrown in my face, Paul’s word to Timothy about the Holy Scriptures remain valid…  It is not based on its infallibility, but its reliability, that Paul made the claim that:

“All scripture is given by inspiration of God, and is profitable for doctrine, for reproof, for correction, for instruction in righteousness: That the man of God may be perfect, thoroughly furnished unto all good works” (2 Tim 3:16-17).

There is no basis for the claim of infallibility.  It is at best a misassociation (i.e. because God inspired it, it must have God’s perfect qualities), and at worst a fabrication (which I suspect, because of the staunch denial against evidence to the contrary) to support a chosen belief system.  Not even this other Scripture, commonly cited in defense of this belief is sufficient to ascribe the infallible nature of God to the Bible.

“For we have not followed cunningly devised fables, when we made known unto you the power and coming of our Lord Jesus Christ, but were eyewitnesses of his majesty. For he received from God the Father honour and glory, when there came such a voice to him from the excellent glory, This is my beloved Son, in whom I am well pleased.  And this voice which came from heaven we heard, when we were with him in the holy mount.  We have also a more sure word of prophecy; whereunto ye do well that ye take heed, as unto a light that shineth in a dark place, until the day dawn, and the day star arise in your hearts:  Knowing this first, that no prophecy of the scripture is of any private interpretation.  For the prophecy came not in old time by the will of man: but holy men of God spake as they were moved by the Holy Ghost” (2 Pet 1:16-21).

I agree with both Paul and Peter and I BELIEVE the Bible.  However, I’d like to reiterate (I’ve said this elsewhere in almost all my posts on this topic) that neither Paul nor Peter were talking about THE BIBLE in their accounts about Scriptures…  There was no Christian Bible at the time they wrote these epistles.

Whenever Scripture was mentioned in the Bible, they were talking about the Jewish Scriptures, which have just been shown to have inconsistencies and contradictions.  Being inaccurate doesn’t mean that it is a book of lies or make belief.  It only means that they were accounts written by humans from the best of their knowledge and with the inspiration of God to remember facts, events and prophecies.  And this is exactly why I love the Bible!

I love the fact that we get multiple accounts of the same story, from different perspectives, and we can still understand the message.  They largely agree and complement each other.   Also, the Holy Spirit can and does minister to us and teach us all things.  I love that the writing spans different times, cultures and religions.  I like the progressiveness of it, and the conclusiveness of it.  It is authentic and beautiful.  To try to say it is without any fault DENIES it’s make up and robs the Bible of its value and beauty.

Believe me, God will not be offended if you admit that the Bible is imperfect.  There is nothing that God made that was perfect…only good and beautiful!  And this wasn’t a project God performed in isolation.  He used imperfect men to bring it about.  Just like the Church He is building up, it has authority and power, but it is not infallible.  We are not to look to the Church nor the Bible, nor any other but God for infallibility.