The expression “follow the money” is well known among journalists seeking to find the source of corruption, particularly in government and big business.  It apparently originated from the movie “All The Presidents Men”.  Most people who are looking to prosper or get rich quick also tend to “follow the money”.  Wherever the money is, that’s where they need to be!  Why should they be left out of the celebration, because of ignorance or trying to be above board?

However, those who have really amounted to anything, and made a difference in their world, even amassing significant wealth were not the kind to follow the money.  Rather, they followed the problem, until they found a solution.  Where there are issues to be tackled, problems to be resolved, opportunities to be created, these wise few are already there, rich or poor, investing in solutions that end up making them so relevant to the world.  And ultimately, money follows them!  They never need to follow the money, because when you have solutions people will pay for, wealth is your destiny.

It is no wonder that the righteous are called to forsake all and seek FIRST the Kingdom of God – the ultimate solution to the world’s probems…and are promised that all other things will be added to them (Matt 6:33).  Jesus actually started this sermon by recognising two opposing gods, saying that you cannot serve both, but must choose between the True God and Creator of all the Earth (YAHWEH) and the man-made god by which men satisfy their longings – Mammon (Matt 6:24).  Paul also wrote well concerning those who are greedy for gain, identifying the problem of evil at its root – the love of money, also known as greed.  He wrote:

“But godliness with contentment is great gain.  For we brought nothing into this world, and it is certain we can carry nothing out.  And having food and raiment let us be therewith content.  But they that will be rich fall into temptation and a snare, and into many foolish and hurtful lusts, which drown men in destruction and perdition.  For the love of money is the root of all evil: which while some coveted after, they have erred from the faith, and pierced themselves through with many sorrows” (1 Tim 6:6-10).

You see, Christians, Believers in Jesus Christ, do not follow money.  They cannot follow money.  They are not motivated by money and cannot be led and deceived by money.  They follow the TRUTH.  Actually, “the Way, the Truth and the Life” – Jesus Christ, the Son of the Living God (John 14:6).  They do not labour for the food that perishes, but for that which endures unto life eternal (John 6:27), which is a reward that only God can give them for their faithfulness to this higher calling that they have been called to – to serve in His Kingdom and not be corrupted by the ways of the world (Jam 1:27, Romans 12).

It’s a shame that the vast majority of our Churches today are filled with people who are not following Jesus, not seeking the truth, but seeking “blessing”.  They followed the money to seek material blessings in these places that appear to be prosperous, and they are taught that it is right for them to seek these things, because God wants to bless them.  They are like the fools who are taken in by their love of money, being deceived by crooked men, as they seek carnal wealth and not the true wealth only God can give.

So, I have been addressing the issue of tithing, through a few of my recent posts.  I am glad that people are reading, praying and looking deeply into these things.  I’ve had a few debates on it, and it is clear to me that the deception is so strong, and it’s only by God’s grace that people will believe and act on the truth.  However, someone recently got back to me after reading the long article I did on tithes and giving a second time, and said “but it’s like you did not suggest the way forward“.  Actually, I believe I did, but I think it wasn’t as explicit as he would like.

I have thought about this often, because others have expressed the concern of not knowing where to go, who to trust, if almost all the Churches advocate for tithing and teach it strongly.  Even the few who do not practice tithing have questionable doctrine.  Are we to start a whole new Church and abandon our churches because they are corrupt?  Can we change it from the inside out?  Can the leadership be overthrown or discharged of their duties and replaced with people filled with the Spirit of Truth?  Is it possible to ever have a Church that is absolutely right on every doctrinal point – and still LOVING?

Recently, I felt the Spirit’s leading to look into the Quakers or Society of Friends, which is a religious society for believers in Jesus Christ, known for having a more diverse and open community.  When I looked into them, I still couldn’t find myself fitting with them.  The Society has suffered the fate of every Christian organisation before and after it.  Fragmenting, splitting up over doctrine, being corrupted by liberal ideas, as they try to embrace everyone.  I felt the pain of the founders of the community, who would surely be grieved to see that what they left is not what is standing!

And I realised that IF I should try to to start a Church, it would suffer the same fate.  There’s no way to keep the corrupt elements out.  There’s no way to stop people dissenting and arguing over doctrine.  There’s no way to ensure that HUMANS do not sin!  Even with God’s Spirit in us, many of us still sin – even willfully!  There will never be a perfect Church, only people who are thirsting for more and more of His righteousness and truth, and abiding in His love and grace…no matter what others are doing.

But this seems so disorganised.  Why and how can we have a religion like this?  How can we fellowship with people we strongly disagree with?  How can be build something that we see completely differently…? 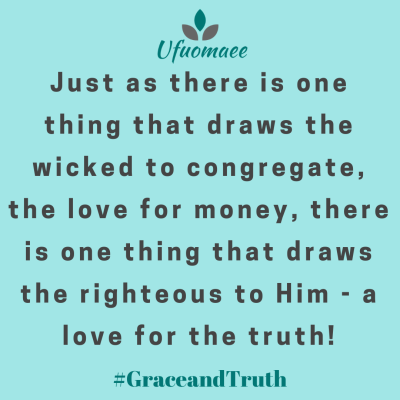 Jesus reminded me that it is HE who is building His Church, and He is doing it by His Spirit of Truth.  Just as there is one thing that draws the wicked to congregate, the love for money, there is one thing that draws the righteous to Him – a love for the truth!  In the Spirit, He reminded me of what He said to His disciples, when they asked where they would go in the End Times, when they are persecuted and Jesus returns again for His saints.

“For wheresoever the carcase is, there will the eagles be gathered together” (Matt 24:28).

Jesus was referring to Himself, likening Himself to a carcass in this analogy.  How do the eagles know where the carcass is?  Telepathy?  Smell?  Sight?  Instinct?  Jesus is saying in this section that we shouldn’t be concerned about following MEN!  Because at this time, and in the end times, many will say “lo here” and “lo there”.  Rather we should be attentive to the Spirit of God within us, the Spirit of Truth, so that He will guide us to the place where we ought to be upon His return!  He is able to lead us into all truth (John 16:13).

So, the questions you should ask yourself at this time, when you know the truth, and others are teaching lies is – is this where God wants me to be?  Is God telling me to stay and abide or to leave?  What is God asking me to do?  How best can I communicate the truth so that MORE will be saved by knowing and obeying the truth?

Walk in the Spirit.  Live by Faith.  Follow the Truth.  No matter the cost.

“Nevertheless when the Son of man cometh, shall he find faith on the earth?” (Luke 18:8).

“The wind blows wherever it pleases.  You hear its sound, but you cannot tell where it comes from or where it is going.  So it is with everyone born of the Spirit…” (John 3:8).