The Marriage ABCs – U for Unity

The saying is true, “United we stand, divided we fall”!  Unity in marriage cannot be over estimated.  It is in fact what defines a marriage – two becoming one!  Unity and marriage are, therefore, synonymous in meaning.  Without unity, there is no marriage.

Marriages don’t fall apart in a day, but over a length of time, when there has been disunity.  The enemy takes advantage of this to create greater distance, distrust and animosity between the couple.  They are separated emotionally, mentally, spiritually before there is a physical manifestation of their division.  If you do not actively work at unity in your marriage, then disunity will take a hold.  So a successful marriage requires two people who choose daily to ‘marry’ themselves, by continually cleaving to one another. 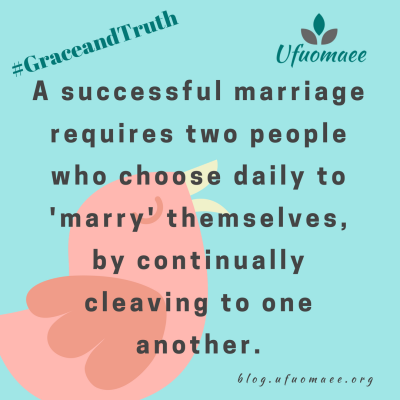 Unity, though synonymous with marriage, doesn’t happen on its own or over night.  It requires you to be intentional, persistent and resilient against the things that cause division.  Your only chance at success in marriage is for you to remain united with your spouse; to work together as a team, not in conflict nor competition, but on purpose and in unity!

Christ tells us that in marriage, the two people have become one…